A Family Affair: The Story of Beth & David 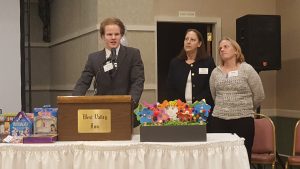 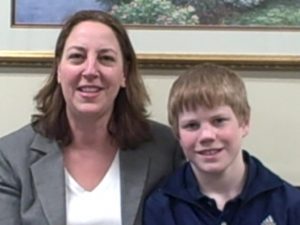 Beth Tidswell and David Cusak have a special bond, one that has developed over more than 15 years as a Mentoring pair.  David was a 6-year-old first-grader at the Cedar Hill Elementary School in Warwick when the two first met.  “I thought I was going to have a male mentor,” says David, “I was afraid when I met Beth that I was going to get stuck doing girly things, but she has been a lot of fun.”  Beth, who worked at MetLife in Warwick, was immediately taken with David, but recalls a moment in the second year of their mentoring relationship when it was clear that a strong bond of friendship had been formed.  “I remember clearly an instance where David and I were reading an I Spy book, he put his hand on my arm and left it there, I knew then that he trusted me,” says Beth.  The bond between the two has now grown so strong that Beth’s husband signed on to be David’s Big Brother, allowing the Tidswell family to spend time with David away from school.  “It was just getting too hard to say ‘see you in September’ every year,” adds Beth.  “David has a great family,” says Beth, “but we are glad that we can give him the extra attention that he needs, by accepting him into our family as well.”  David is also very happy with how the relationship has grown, “I feel like Beth and Charlie are a second family to me, I am comfortable in their home and feel like it’s my second home.”  “David has truly become family,” said Beth.  “At each of my daughters’ weddings, David walked me down the aisle.”

Full Circle: The Story of Peggy and Korinne:

When Peggy Germani and Korinne Amelian first met, Korinne was a shy, adorable 3rd grader at Warwick Neck Elementary School. Her teachers felt that little Korinne could benefit from some support and guidance, as her family was going through hard times.

Peggy had been a volunteer for many years, working with children at the Windmill School through Volunteers in Providence Schools among other things. She joined the Rhode Island Mentoring Partnership’s Warwick Mentor Program in the mid 1990’s, attended their very comprehensive training, and began acting as a mentor to young people in her area that had been identified as needing support.“It took a little while for us to get comfortable together,” said Peggy about that first meeting, “Korinne was somewhat apprehensive at first, but really we hit it off pretty quickly.” The two spent time together every week, talking, doing crafts and forging a bond that was to last much longer than anyone anticipated.

“Once I got to high school,” said Korinne, “we had to continue on our own. There wasn’t really a mentor program in the high school.” So the two would meet after school, and Korinne continued to rely on Peggy’s wise, caring nature. When Korinne was 16, Peggy taught her to drive, and began helping her explore career goals. “Peggy was the only one I was talking to about these important things in life. She was always there for me; I could tell her anything” says Korinne, adding with a smile, “She was sort of a nag, though!” A big milestone for the two was Korinne’s acceptance to college. It was especially meaningful as she received a scholarship through the Rhode Island Mentor Partnership itself. Today, Korinne has a great job in the Risk Management department of a large bank. She is still going to school, and is proud of her accomplishments to date.

And, in homage to the wonderful gift she was given, Korinne is now a mentor herself, to a ten year-old girl at the same school where she first met Peggy. “It’s a lot of work!” marvels Korinne, “You really have to wing it; there are no right or wrong answers. But I remember very well how much it meant to me when Peggy showed up every week, and it feels good to know that my mentee can depend on me, too.”

Being with this pair, you can’t help but notice the bond they have forged, and the great respect that each has for it. Peggy glows about how rewarding the experience has been for her, saying, “It has really indulged my maternal side. She knows I’m always there for her. I’m so proud of her and all she’s accomplished in spite of difficult circumstances.” As for Korinne, she credits Peggy with so much of her success, saying “she was the stability in my life. She is my role model, my rock. She is the person I would like to be.”